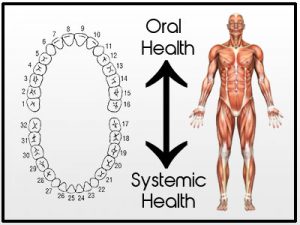 One basic premise of holistic and biological dentistry is that there’s a real and crucial relationship between the health of your mouth and the health of the rest of your body.

It’s an idea rooted in what came to be known as focal infection theory. Dr. Weston Price, a lead researcher for the American Dental Association back in the early 20th century, showed its validity through extensive animal experiments. He found that root canal teeth could contribute to whole body disease and dysfunction, which we know come from harmful microbes and their neurotoxic waste products that remain in such teeth even after extraction.

Yet focal infection theory came to be scorned by orthodox dentistry, which tended to treat the mouth as wholly separate from the rest of the body.

Today, however, the mainstream seems to be changing its tune. Under the headline “Focal Infection Revisited,” a recent article summary in BDJ remarked on this shifting interest.

Between 1947 and 1989, 82 papers were published, addressing possible links between oral and systemic disease. Since 1989, however, there have been more than 1,200 such publications. These indicate that there are associations between oral disease and conditions such as coronary heart disease, stroke, pneumonia, diabetes, liver disease, rheumatoid arthritis and infant low birth weight. Whilst these links are not established as causal, the relationship between the mouth and the rest of the human body is being made yet again but this time on a scientific basis, showing that the dental profession does have a role to play in the health of the patient as a whole.

One of the liveliest areas of research these days concerns the relationship between gum disease and a wide range of inflammatory conditions, from diabetes to rheumatoid arthritis, heart disease to cancer.

Just this month, new research in the Journal of the National Cancer Institute showed that severe gum disease – periodontitis – appears to raise the risk of developing cancer, especially lung and colorectal cancers. Overall, the risk among periodontitis patients was 24% higher than for those with mild gum disease or healthy mouths.

This long-term study was the largest of its kind to date, noted lead study author Dominique Michaud, ScD, in a statement.

This comes on the heels of other recent research on cancer risk with respect to the make-up of the oral microbiome, the community of bacteria living in the mouth, helpful and harmful alike.

For instance, a study in Cancer Research found that the risk of esophageal cancer was associated with specific oral bacteria. A similar analysis found an elevated risk of head and neck cancers. Yet another found distinct microbial communities associated with colorectal cancer. Pancreatic and stomach cancers have also been linked.

But it’s not all bad news. Research into the oral microbiome has also found that certain bacteria may actually help prevent some cancers. This was an incidental finding of the esophageal cancer study mentioned above and the major focus of a recent paper in JAMA Oncology. Specifically, the research team’s analysis showed that

The effect was even stronger in current and former smokers.

The moral of the story? Keeping your teeth and gums healthy could actually help lower your risk of developing certain cancers. Beyond brushing, flossing, and eating a healthful diet, this can also include using probiotics to help maintain good microbial balance in your mouth. You can do this through diet with fermented foods such as sauerkraut, kimchi, kefir, kombucha, yogurt, and more. You can supplement. You can use probiotic toothpastes and rinses.

As ever, the key to good oral health remains supporting the helpful bacteria and keeping the harmful in check.