What is a Cavitation? 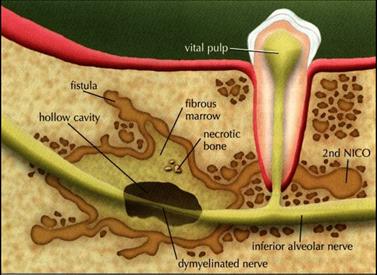 A cavitation is a hole in the bone, usually where a tooth has been removed, and the bone has not healed/filled in properly. It is an area of osteonecrosis (dead bone). Often when a tooth is extracted, the surrounding periodontal membrane is usually left behind. Theoretically, after a tooth has been pulled, the body eventually fills in the space in the bone where the tooth once was. But when the membrane is left behind, an incomplete healing can take place; a hole or a spongy place remains inside the jaw bone. Experts speculate that this incomplete healing occurs because the bone cells on both sides of the extraction site sense the presence of the periodontal membrane and “think” that the tooth is still there.

A cavitation can form in any bone in the body, not just in the jaw bones. There are other reasons for the formation of cavitations. These reasons may include, among others, localized traumas, poor circulation to the area, clotting disorders, the use of steroids, and the use of dental anesthetics containing epinephrine (a potent vasoconstrictor).

The membrane left behind after an extraction can form an image that appears to be a shadow of a tooth when an X-ray is taken of that site. Almost always, this image is indicative of a cavitation. Most dentists are aware of this phantom tooth image, but they do not recognize it as a site of potential problems.

Inside a cavitation, anaerobic bacteria flourish and deviant cells multiply. Cavitations act as a breeding ground for bacteria and their toxins. Research has shown these bacterial waste products are extremely potent and result in digestion problems, chronic fatigue, general feeling of malaise, and other chronic health problems. Cavitations can also cause blockages on the body’s energy meridians and can exert far-reaching impact on the overall system. Investigation has revealed that some cavitations are reservoirs of huge amounts of mercury. Cavitations may be a source of low level or high level stress on the entire body.

Diagnosing cavitations is an elusive process because cavitations do not always readily appear on X-rays. Sometimes they show up only as very subtle differentiations in the texture pattern of the bone. If your dentist is not specifically looking for the cavitations, then your X-ray will be read as looking “just fine”. Thanks to the recent development of 16 bit shade mapping on our 3D scanner, however cavitations are much easier to identify. We also utilize the Cavitat scanner to assess bone quality throughout the mouth.

Ultimately, the diagnosis is made after the area has been surgically debrided and a biopsy is sent for pathological review. Two types of biopsy are available from our office: tissue and DNA. The tissue biopsy will enable us to tell what has happened on a cellular level to the tissues involved. Usually we see focal necrosis, dystrophic calcification, fatty edema, chronic inflammation, and other descriptive terms from the pathology report. The DNA test allows us to see exactly which bacteria are present in the cavitation, what toxins they produce, and what illnesses are associated with those bacteria and toxins.

Once an area is isolated as a cavitation site, the are is surgically debrided. I routinely give IV vitamin C during surgical procedures. Vitamin C is absolutely critical in the formation of new tissue (which you will be doing after surgery). I typically administer about 40 grams of vitamin C over 2-3 hours. After getting numb (you may also be put to sleep by our nurse anesthetist, if you so desire), I make an incision along the top of the lesion. I then “drop” into the cavitation with a sonic surgical diamond (no rotational instrumentation) and copious irriagation. The dead bone is removed until solid, healthy bone is felt around the periphery of the lesion and copious, clean blood exudes from the surgical site. Oily bubbles almost always float to the top of a cavitation. After the site is bleeding well, I irrigate it with ozonated saline, then I fumigate the area with straight ozone gas (ozone is 8000 more bactericidal than chlorine). Your blood (the fibrin clot) acts as the latticework for new bone in the previous cavitation site. Sutures are then placed and you are released. Motrin and Tylenol are typically adequate to control any pain 1-2 days after the surgery. Pain medication is not typically necessary the second day after surgery.

NICO
Specialists have recognized cavitations as a possible cause of chronic facial pain and termed them “NICO” (Neuralgia Inducing Cavitational Osteonecrosis). Often this is the overlooked factor in trigeminal neuralgia, as well as other kinds of facial pain.

SICO
While it is good that the impact of cavitations on facial pain is finally being considered, the far-reaching bodily impact of cavitations is still vastly underappreciated. Cavitations on major meridians can cause serious health problems. Dr. Mark Breiner has termed this “SICO”, or Sickness Inducing Cavitational Osteonecrosis, which better indicates the power a cavitation can have over the general health of the patient. Analysis of cavitational samples by researchers at the University of Kentucky have thus far found every one of them to contain biologically toxic material.

Getting treatment for cavitations in the mouth can reduce pain and eliminate toxins that may be spreading throughout the area. Cavitation treatment can improve conditions and provide relief for some of these problems: